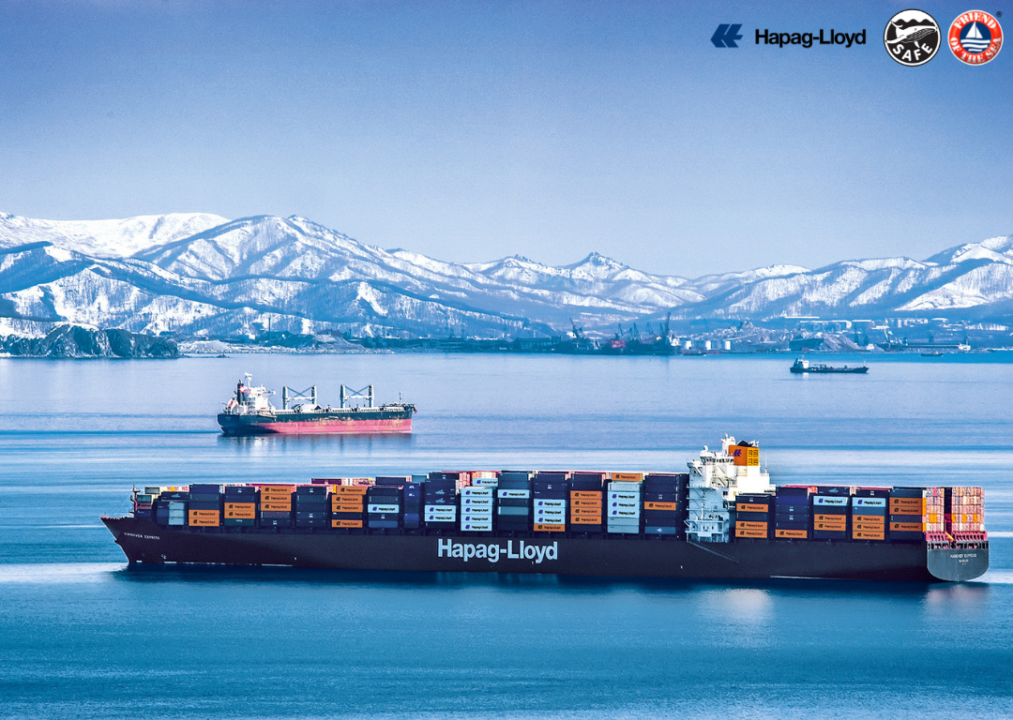 The first company to receive recognition owning to their outstanding practise, commitments, and concern towards the protection of endangered whale populations from lethal ship strikes

Friend of the Sea, a conservation project by the World Sustainability Organization is pleased to award Hapag-Lloyd, one of the world’s leading shipping companies, the highest level of Whale-Safe recognition for its outstanding degree of engagement and effort towards the conservation of endangered whales under ongoing threat from whale-ship collisions.

Whale-ship collisions remains a neglected yet concerning issue onset by the maritime industry. Studies have shown that collisions with ships represent one of the most salient threats to whales, prompting concerns that continual neglect may dwindle the already endangered species’ pass the tipping point towards extinction.

With the shipping industry steadily expanding by 3% annually, Friend of the Sea initiated the Whale-Safe campaign out of concern for corresponding surmised rises in collision induced mortalities. The initiative, launched in 2020, was motivated after internally conducted research exposed the severity of the issue, which has since garnered encouraging media attention over the last two years clearly outlining its neglect and subsequent significance. The culminating Friend of the Sea Whale-Safe award is intended to attract further critical awareness and to spur collective dialogue towards designing effective solutions, and ultimately imperative change within the maritime industry.

“Friend of the Sea strives to amplify the voices of shipping operators who outspokenly recognise the sea, not merely as a convenient venture, but as a resource of intrinsic value that we must respect and protect” Paolo Bray, Founder and Director of Friend of the Sea

Friend of the Sea assessed the top 20 shipping and cruise line operators globally according to their level of compliance, engagement and efforts directed in abating whale-ship collisions. Through meticulous scrutiny of internal environmental reports & policies, direct engagement with relevant sustainability associates and exhaustive inspection of all available information online, Hapag-Lloyd was found to have achieved the highest score for its active involvement in numerable voluntary initiatives underscoring its distinguished efforts.

Hapag-Lloyd actively advocates in collaboration with the World Shipping Council (WSC) for the movement of one of the world’s busiest shipping lanes that currently intersects with high densities of blue whale population. It is suggested that a mere 15 nautical mile refinement of the current route situated on the southern top of Sri Lanka would see whale-ship collisions reduce by 95%. Hapag-Lloyd also participates in the Enhancing Cetacean Habitat and Observation (ECHO) research program, an initiative aimed at better understanding the effects of shipping towards whales migrating the coast of British Columbia and building possible solutions for underwater noise reduction.

Hapag-Lloyd also led the Protecting Blue Whales and Blue skies scheme by cruising 89% of the distance travelled in the San Francisco Bay and the Santa Barbara at a whale-safe speed of 10 knots or less, earning them the highest ‘sapphire’ award, shared with only four other shipping operators.

Other recognised efforts of tangible engagement are evident with Hapag-Lloyd’s participation in the Shenzhen Green Ports Program, the EcoAction program, the Voluntary Vessel Reduction Program, the Green Flag Incentive Program, avoidance of artic shipping routes, and maintaining a zero-tolerance policy towards transporting controversial goods that remain unregulated by shipping institutions.

Hapag-Lloyds’ first prize in Friend of the Sea’s ranking comes with little surprise given its comprehensive internal sustainability policies. By issuing an unparalleled level of transparency and acknowledgement of the environmental impacts of shipping, Hapag-Lloyd have showcased its holistic approach by accompanying its successful business practise with formidable environmental performance, setting a precedent in the industry with its sustainable maritime stewardship.

To learn more about whale-ship collisions, the whale-safe campaign and Hapag-Lloyd’s approach to possible solutions, Friend of the Sea is hosting a free webinar on the 17th of February at 15:00 CET.

The 30-minute session will be led by Simone Panigada, president at the Tethys Research Institute, Roberto Lombardi, marine biologist at Friend of the Sea, and Captain Wolfram Guntermann, director of regulatory affairs at Hapag-Lloyd.