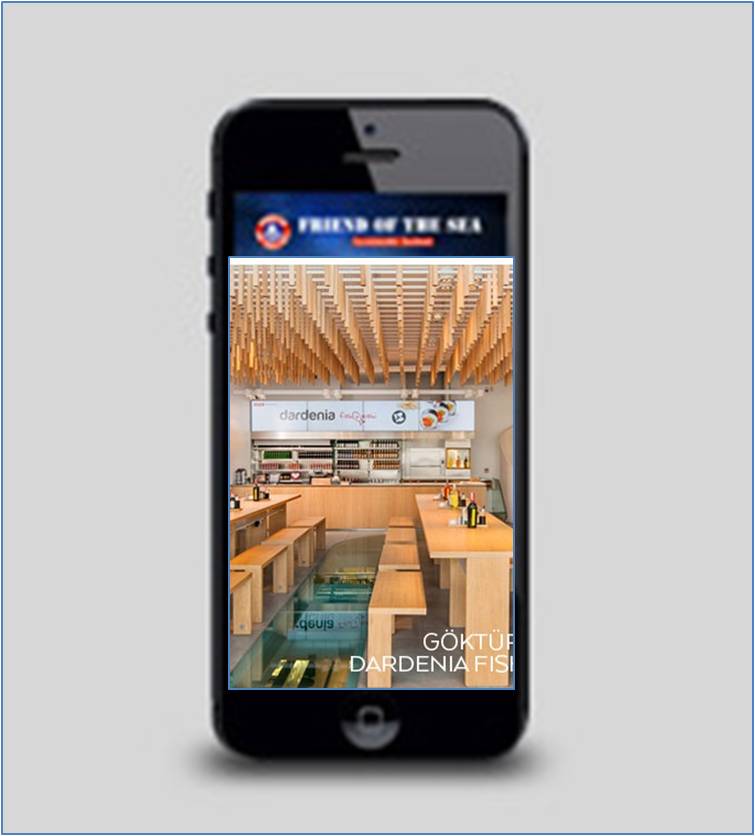 Dardenia restaurants are easily found on Friend of the Sea Seafood mobile app, as it is compatible with iOS and Android.

Dardenia
Founded in 2011, Dardenia is Turkey’s first and only seafood fine fast-food category chain in Istanbul . The restaurants reached over 130,000 customers in the first year. Dardenia has recently increased the service with 6 restaurants. Dardenia is the latest endeavour by the 30-year-old Dardanel company whose mission is to put fish on the table in each home.
www.dardenia.com

Dardanel
Founded in 1984, Dardanel Önentaş Gıda San. A.Ş., is the major producer of canned and frozen seafood in Turkey. The factory, based in Cannakale, produces mainly canned tuna, tuna salads, tuna in pouch and jar, canned mackerel, sardines and anchovies. Products are distributed in Turkey, but also in other countries in Europe, USA and Turkey neighbouring countries. Dardanel tuna is also Dolphin-Safe according to the Earth Island Institute.
www.dardanel.com
esra.turkyilmaz@oneholding.com

Friend of the Sea
Friend of the Sea is an international certification program for products from sustainable fisheries and aquaculture. Over 400 companies in more than 50 countries have relied on Friend of the Sea to assess the sustainability of their seafood origins. Audit are run by independent certification bodies accredited by national accreditation institutes. Audit are run also on site and they are based on best and most updated available scientific data.
www.friendofthesea.org
info@friendofthesea.org